Growing through barriers: new TechSPARK partner Mettle join us to talk growth and constraints in the South West tech cluster

We’re delighted to announce Mettle as our latest TechSPARK Partner. Mettle is a new financial services company developing the forward-looking business current account that helps businesses make better decisions. This roundtable discussion was in aid of fruitful discussion around the growth of the startup ecosystem in the South West and the possible constraints that could […] 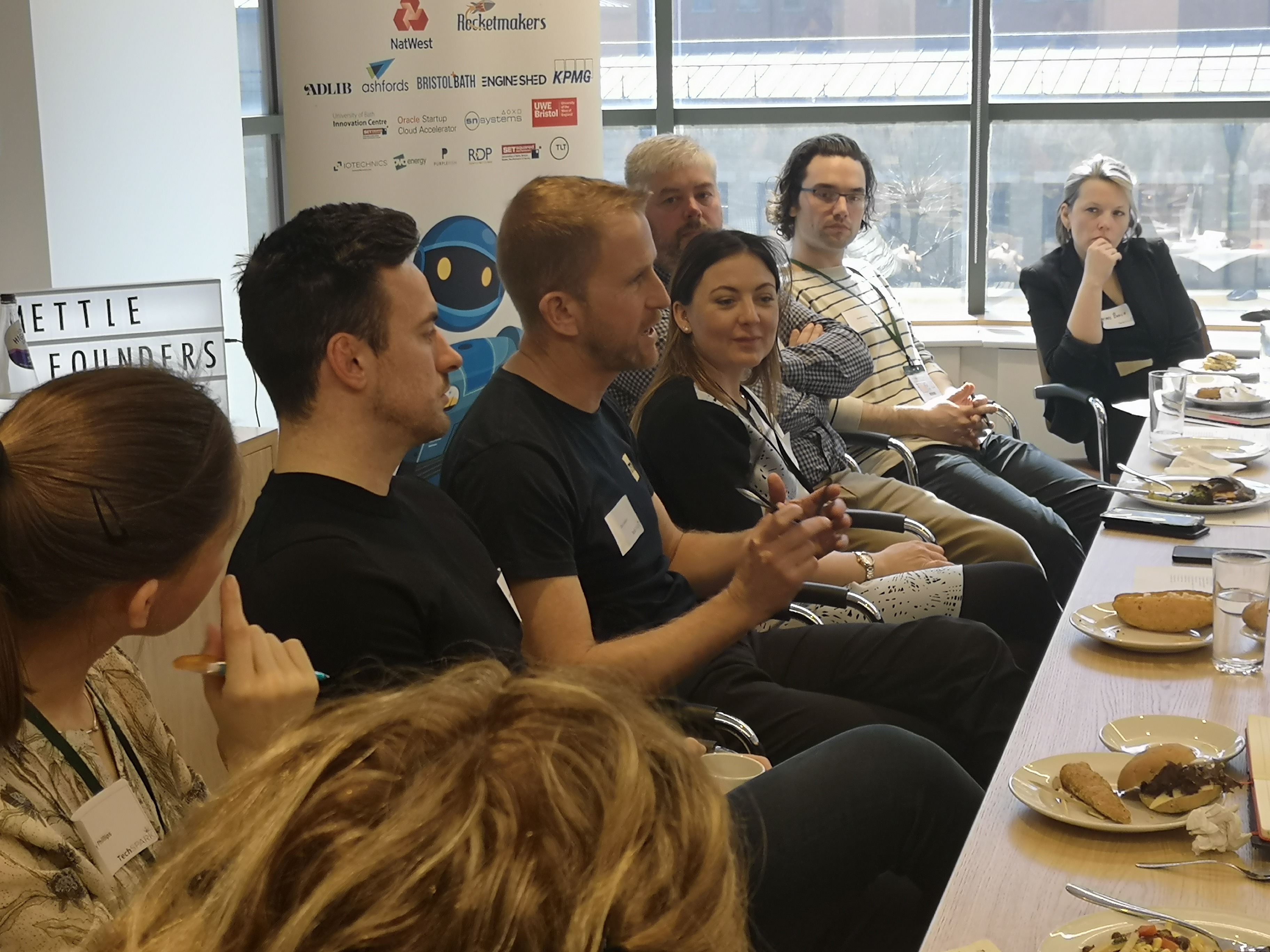 This roundtable discussion was in aid of fruitful discussion around the growth of the startup ecosystem in the South West and the possible constraints that could hinder this.

We know there are a multitude of people working on this specific task, all doing great things in the pursuit to make the Bristol and Bath tech cluster the best it can be – and we want everyone else to know about it to!

Briony Phillips, Associate Director and Scaleup Enabler at Engine Shed, talks about the map they created in order to illustrate, “what barriers there are based on some of the work the Scaleup Institute had done.”

Utilising this resource, it is possible to pinpoint that office space and raising financial investment are the two biggest problems for startups in the region. Surprisingly, “it can take up to three times longer to raise the equity required in Bristol than if you were in London,” says Briony.

Financial barriers are a wider spread issue too. Luckily for those based in the South West, there are myriad of schemes to help disrupt this.

Chris Geldard, Interim CEO at Mettle, says, “There are loads of dev factories setting up that incorporate pay when you start earning schemes,” emulating the current university system to encourage people of all backgrounds into education.

Education centres such as Bath’s Mayden Academy are pioneering in this. Jane Wright, Inward Investment Manager at IBB tells us about their current initiative to facilitate careers in coding for women: “There are a number of public sector interventions funding the region.

“The current scheme at Mayden seeks to encourage 350 more women, either unemployed or undergoing a career change, to get into digital jobs through private sector training; 70% of which is funded through the West of England Combined Authority’s WIDJET project (Women into Digital Jobs, Education and Training).”

Rosie Bennett, Centre Director at Bath SETsquared Innovation Centre, points out, “there’s this massive skills gap between what the universities are teaching and what the companies need.”

Different methods of education could be key to combating this. She says, “The Institute of Coding with the University of Bath is pioneering the apprenticeship degrees in partnership with varies companies.”

Embedding diversity & inclusion programmes into the framework of how things work in a small business is one of the many positive changes we are currently seeing.

Thanh Quan-Nicholls, co-founder of Women’s Tech Hub, explains the difficulties that are still arising in this area: “When I was running meetups at DeskLodge, I could have an attendance of 50 people and none of them be women.”

Moreover, finding women fulfilling roles still seems to be rare: “We’ve found we can recruit women into certain roles, they’d start the job and then the company culture would be all wrong and they’d leave again.

“So, it’s about working with these businesses and ensuring the company culture is right.”

Tatjana Humphries, Senior Business Executive at IBB, highlights that there are certain tactics employers use when searching for new talent that unintentionally exclude women, “such as hidden salaries.

However, as Richard Godfrey, CEO at Rocketmakers, says, “It’s a massive leap of faith for organisations to take on this change.” Slowly but surely, they’re doing just that.

What more can be done?

The barriers to growth are not insurmountable. And techies in the South West are setting the examples.

Tatjana tells us, “having a monthly budget to host meetups, just like Just Eat did when they first set up in Bristol and were trying to establish a reputation in the tech industry, is a great way to meet the best talent and show them your company culture.”

Ashley Wheeler, Head of Partnerships at TechSPARK, supports this view, “Despite Bristol being a big city in terms of population, meetups and networking events are hugely accessible.” This is a massive contributor to the successes businesses are seeing in the city.

Charlie Harding, Senior Designer at Potato, was asked about the differences between the international offices and the Bristol office.

He says that things have progressed better than anyone would have expected: “Historically London was a gatekeeper but now we’re much more focussed on Bristol being a self-sustaining base.”

And as Charly Patrick, Entrepreneur Development Manager at NatWest, points out, “with a global clientele, there’s no need to be in London.”

Collaborating between remote offices can be a challenge. Jamie Donald, Head of Sales at Yellowdog, says it is important that “it isn’t a us and them mentality.”

Change is happening on our own soil too. Louis Spencer, Commercial Banker at NatWest, explains that “competition of companies like Monzohave shocked us into action. Mettle is a prime example of what NatWest is doing to disrupt itself.”

So, as always, innovation and connections continue to have a profound impact on startup growth.

Thanks to everyone who participated in the roundtable discussion and to Natwest and Mettle for hosting us.

New podcast is Seeking Out The Next Generation of Entrepreneurs