Technology that turns urine into electricity commercialised through spin out company

A spin-out venture has been formed to commercialise technology developed at the University of the West of England (UWE Bristol) that converts urine and other types of wastewater into electricity. Robial, a social enterprise, will advance the innovative PEE POWER® technology that emerged from a PhD research project at the university 17 years ago.   […] 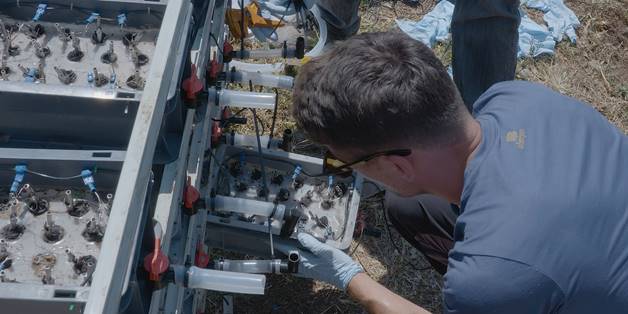 A spin-out venture has been formed to commercialise technology developed at the University of the West of England (UWE Bristol) that converts urine and other types of wastewater into electricity.

Robial, a social enterprise, will advance the innovative PEE POWER® technology that emerged from a PhD research project at the university 17 years ago.

The system developed at Bristol Robotics Laboratory (BRL) can turn organic matter such as urine into enough electricity to power lighting or charge mobile phones. At the same time, it sanitises urine and produces plant fertilizer as a natural by-product.

Funded by the Bill & Melinda Gates Foundation, EPSRC and the EU, the technology has been successfully trialled at Glastonbury Festival and introduced at schools in Africa with limited access to mains electricity.

Professor Ioannis Ieropoulos, Director of the Bristol BioEnergy Centre at BRL and creator of the technology, said: “Our development of this 100-year old Microbial Fuel Cell technology began in the early 2000s and has advanced along the readiness scale to the point it’s almost ready for the commercial world. This means it can now begin to serve society, which is what we set out to do in the first place, and we are now setting up the vehicle for producing volume.”

John Greenman, Emeritus Professor of Microbiology at UWE Bristol, said: “It marks a significant step for the project and for the development, commercialisation, and adoption of next-generation toilet technology to meet the sanitation needs of the world’s poorest communities. We are thrilled to see that PEE POWER® is part of a wave of technologies from across the globe that are innovative approaches to sanitation.”

Robial has been formed with the support of Oxentia, an innovation and transformation consultancy, helping to develop and grow the potential of the technology, initially within the humanitarian sector and subsequently into other market sectors.

Dr Bruno Reynolds, Senior Consultant at Oxentia, said: “We are delighted to have the opportunity to work with this transformative technology. Professor Ieropoulos and his research team are at the forefront of Microbial Fuel Cell (MFC) research. Robial, as a social enterprise, has the potential to transform the lives of billions who currently do not have access to sewage-networked sanitation. In building a business based on this technology, we expect to attract investors who share our goal of improving the safety and sanitation of billions of people all over the world.”

Fully developed prototypes will be exhibited to international public and private sector leaders at the Gates Foundation’s Reinvented Toilet Expo in Beijing, China, this week (6-8 November), when Robial will be officially launched. The expo will unveil pilot-tested technologies that are at the forefront of new, safe, and effective sanitation solutions that don’t require water or sewer connections.

Professor Ieropoulos said: “It will be a chance for the participating delegates to see the technology working, there and then. In an outside space, we’ll have a toilet block with three cubicles (two with urinals supplied by ROCA and one with the urine-diverting toilet supplied by EOOS) attached to a PEE POWER® system. This will power lights and e-display screens inside the cubicles. Inside the expo, we’ll have models and videos on display which show how the technology works as well as earlier examples of our system from Glastonbury Festival in 2015 to show how the project has advanced.

“We hope to make contacts with commercial and industrial partners, identify synergies with different businesses and gain access to manufacturing processes as well as raw materials in different countries, including those we would like to operate in. The aspiration is that we come away from the showcase with a clearer understanding of how we may take our product and make it part of standard production lines and processes.”

The PEE POWER® technology uses organic material found in urine as a fuel, with the waste water being channelled through a series of microbial fuel cells to create electricity. It has been used to provide lighting for toilet blocks at schools in Uganda and Kenya. As well as in schools, the technology could eventually be installed in refugee camps, slums and hospitals.

Professor Martin Boddy, Pro Vice-Chancellor for Research and Enterprise at UWE Bristol, said: “We’re delighted that this novel technology, which has been 17 years in the making, has reached the stage where it can be commercialised and taken out into the market. It has the potential to have a huge impact on the lives of people living in communities in the Developing World and other applications beyond. PEE POWER® will continue to have the University’s support and backing as it continues to the next phase of its journey.”