Here at TechSPARK we are constantly exposed to the wealth and breadth of innovation going on in the South West, so it’s no surprise to us that a new list of 25 disruptive companies from the region includes ground-breaking tech from the spheres of artificial intelligence, robotics, blockchain, smart cities, cloud computing and 3D technology. “These companies […] 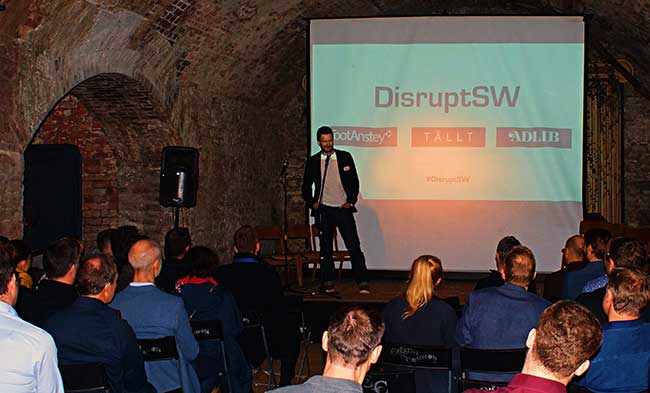 Here at TechSPARK we are constantly exposed to the wealth and breadth of innovation going on in the South West, so it’s no surprise to us that a new list of 25 disruptive companies from the region includes ground-breaking tech from the spheres of artificial intelligence, robotics, blockchain, smart cities, cloud computing and 3D technology.

DisruptSW created the index to show off the startups it believes have the potential to scale and disrupt markets. With names like artificial-intelligence microchip producer Graphcore, self-driving car tech firm FiveAI and mid-air haptic company Ultrahaptics on the list, it’s hard to disagree with them. And it’s not just Disrupt South West who think they are companies to watch, the ventures named in the index have already attracted over £130 million in investment from all over the world.

DisruptSW also plans to bring a new series of events to bring South West startups, corporates and investors under one roof, to explore and celebrate innovation taking place in the region. It’s a joint venture between data-driven intelligence company Tällt, the region’s leading recruiter of digital and technology people ADLIB and Foot Anstey, one of the UK’s largest and fastest growing law firms outside of London. Nick Dean, MD at ADLIB (pictured left) tells us they joined forces to put together the list in a spirit of collaboration: “It’s a quality that shone throughout the launch event of the index. Individually ADLIB, Foot Anstey and Tällt offer very different very business propositions, however the common point we have being our respective audiences – those that drive innovation, change and disruption through technology.

“Following an initial scoping meeting we swiftly spotted the opportunity to take Tällt’s Global Disrupter 100 index theory and create a South West and showcase index that would not only showcase several significant success stories but also highlight the rising stars of tomorrow.” Ben was impressed by the index: “The level of companies highlighted in the list really show that the South West is a hub of globally significant tech businesses. It would be hard not to be impressed by companies developing mid-air haptic feedback, autonomous cars or 3D-printed prosthetic limbs!

“The most exciting thing about the list is the scale and scope of activity. These companies are disrupting technologies and markets globally but most of them didn’t even exist 5 years ago. It just shows how amazing the future is going to be in our tech cluster.”

“DisruptSW won’t stop here. This is just the beginning…” Matt Connolly, Founder and CEO of Tällt Ventures (pictured left), says, “The south west has a long history of innovation, from Brunel to the BBC, and is now a brilliant melting pot of industry, academia, creative industries and technology.

“More recently, the region has benefitted from government technology led initiatives, including the new Bristol University campus and the recent green-light given to Engine Shed 2, plus its close proximity to London means businesses have been able to entice leading innovators and technologists leaving the capital. Combined, this has led to a community that is perfectly placed to attract and grow early stage tech innovation companies.”

“What we must do now is continue to build the profile of the South West as a leading technology innovation hub, we need to continue to attract the top talent into the region allowing the scaling startups based in the South West to maintain their growth.”

Nick adds: “DisruptSW won’t stop here. DisruptSW is set to remain an initiative and place to share, celebrate and connect SW Success. This is just the beginning… ”

You can check out the DisruptSW Blog, featuring South West Growth and Success and keep an eye out for more to come from team DisruptSW.

Spin Up Science’s mission to strengthen the deep tech sector