Profile: Perceptual Robotics on using drone tech to do the dull, dirty and dangerous

We often hear about drones dropping off parcels and taking stunning aerial footage, vans driving themselves hundreds of miles, and even robots having conversations with hospital patients. It’s also true that the serious potential for autonomous and intelligent robotic technology across a variety of industries is increasing, but its less documented use, solving many time […] 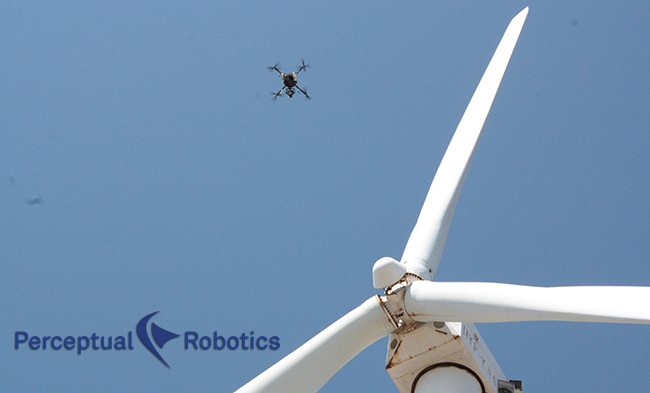 We often hear about drones dropping off parcels and taking stunning aerial footage, vans driving themselves hundreds of miles, and even robots having conversations with hospital patients. It’s also true that the serious potential for autonomous and intelligent robotic technology across a variety of industries is increasing, but its less documented use, solving many time and cost-heavy problems whilst reducing risk and danger to humans, is also on the rise.

Perceptual Robotics, which is based at the Bristol Robotics Lab and part of the global no.1 university startup incubator SETsquared, is one of the companies solving some of these complex problems with robots.

The startup was set up just one year ago by cofounders Kevin Lind, Kostas Karachalios, Dimitris Nikolaidis, Thomas Richardson and Chris Day to creatively maximise the use of autonomy and intelligence in robots. “What we saw as the main road block was the framework for integrating algorithms and systems in a way that is safe, and reliable to address industrial problems,” Kevin tells us.

“From a commercial point of view, the emerging robotics sector needs to push technology through the technology readiness level (TRL) 4-6, so that the technology can have an impact by helping solve the dull, dirty and dangerous.”

Take a look at the video below to see the Dhalion drone in action:

Kevin explains: “Dhalion is an autonomous drone for the inspection of the 340,000 wind turbines that are currently installed worldwide. Instead of having a technician climbing up and down a wind turbine, it flies around and takes images of the blades to provide all the information necessary to maintain the wind turbine.

“What is really exciting about it is the automation, it can not only collect the data with minimal user input it also processes the data and gives the wind turbine operators fast, actionable results.”

Despite being founded just one year ago, the Perceptual Robotics team has already collected an impressive number of achievements.

In the summer of 2016, the company completed its first autonomous inspections of wind turbines and then went on to present the technology at the Wind Europe event in Hamburg alongside Bristol-based energy consultancy Garrad Hassan (now part of global quality assurance and risk management firm DNV-GL).

“It’s great to see so many innovative, exciting ideas coming out of the University” 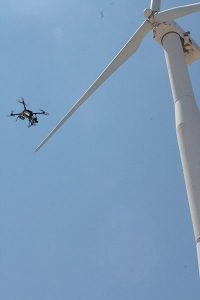 Kevin adds: “From this work, Innovate UK has co-funded Perceptual Robotics and the University of Bristol for a year-long development of Dhalion our first product.

“In the last months we have completed the full-scale prototype of our system that can perform inspections to industry standards. We are very excited for our next steps in finalising and proving the system.”

The team also recently spoke about their achievements at the Bristol Quantum Information Technologies Workshop. Kevin tells us: ‘The entrepreneurial community in Bristol is great, we were contacted through SETSquared to pitch. I really enjoyed the event, it was put on by QTEC, a part of the University of Bristol and as an alumni it’s great to see so many innovative, exciting ideas coming out of the University.”

Commenting further on some of the other exciting startups in the South West region, Kevin adds: “A couple years ago I interned at Open Bionics and was very impressed. DroneX in the Bristol Robotics Lab is also doing great work with drones, they’re innovating in the space which is very cool to see.

“Finally, Rovco is developing autonomous underwater robots in Bristol and their mapping techniques are very cool.”