Spotlight on: Meet the self-driving cars that will be hitting the streets of Bristol

Last week TechSPARK was invited to the F1 Williams Advanced Engineering Centre to see the progress the Venturer Cars consortium has made in bringing self-driving cars to the South West. And an impressive showcase it was too. Venturer Cars is a £5-million 3-year R&D programme led by engineering company Atkins being worked on by a […] 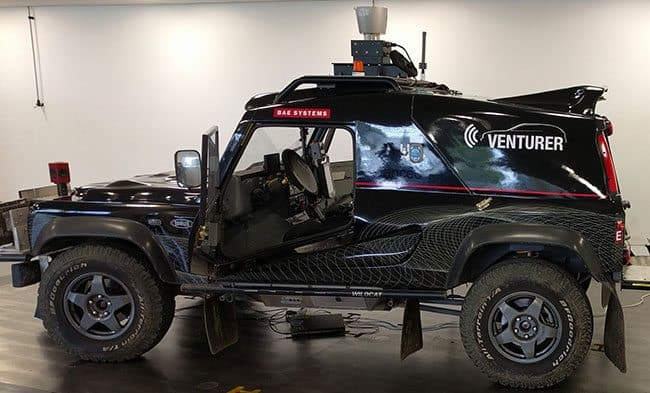 Last week TechSPARK was invited to the F1 Williams Advanced Engineering Centre to see the progress the Venturer Cars consortium has made in bringing self-driving cars to the South West. And an impressive showcase it was too. 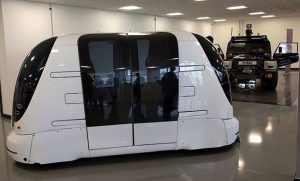 Venturer Cars is a £5-million 3-year R&D programme led by engineering company Atkins being worked on by a collective of companies, organisations and academic institutions to make autonomous vehicles a reality on the streets of Bristol and South Gloucestershire.

It has spent the last nine months developing the tech to power, communicate with and control these driverless vehicles, as well as tackling surrounding issues like public acceptance and how things like driving licences, insurance and liability will work in cars without human drivers.

“90% of accidents are caused by human error”

On show were two versions of the test autonomous vehicles, a converted Wildcat Landrover that has been used for testing the driverless technology and an electric pod, like the ones used at Heathrow, which is the more likely design that will be seen roving around Bristol. 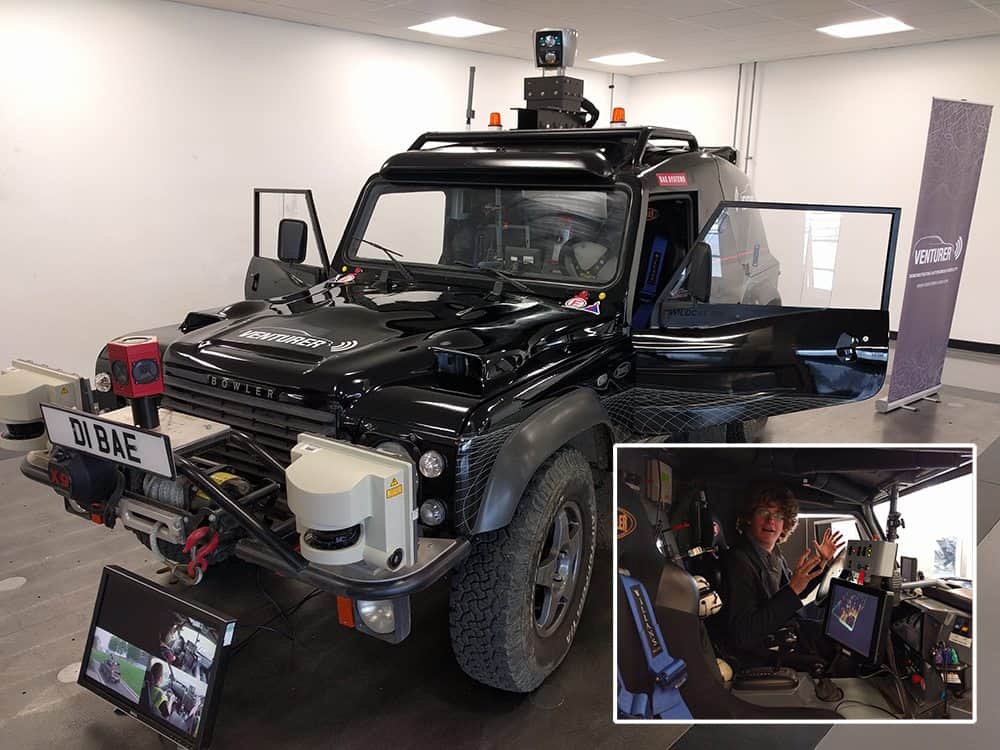 Self-driving Wildcat: Sensing the world around it using cameras and lasers

The Wildcat uses both cameras and LIDAR (a laser-detection system) 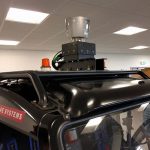 to detect where it is on the road and other road users. In the vehicle, with the LIDAR spinning (see right) you could see the car detecting people walking around it and building up a 3D image of its surroundings.

The pod, meanwhile, is the more likely design to actually hit the streets of the West of England. It runs solely on electricity and will be very similar in design to those driverless vehicles already in service at Heathrow ferrying passengers back and forth between terminals. The plan is to test the vehicles at a dedicated test centre this year before letting them loose on the busy roads of Brizzle and South Gloucester in 2017/18. 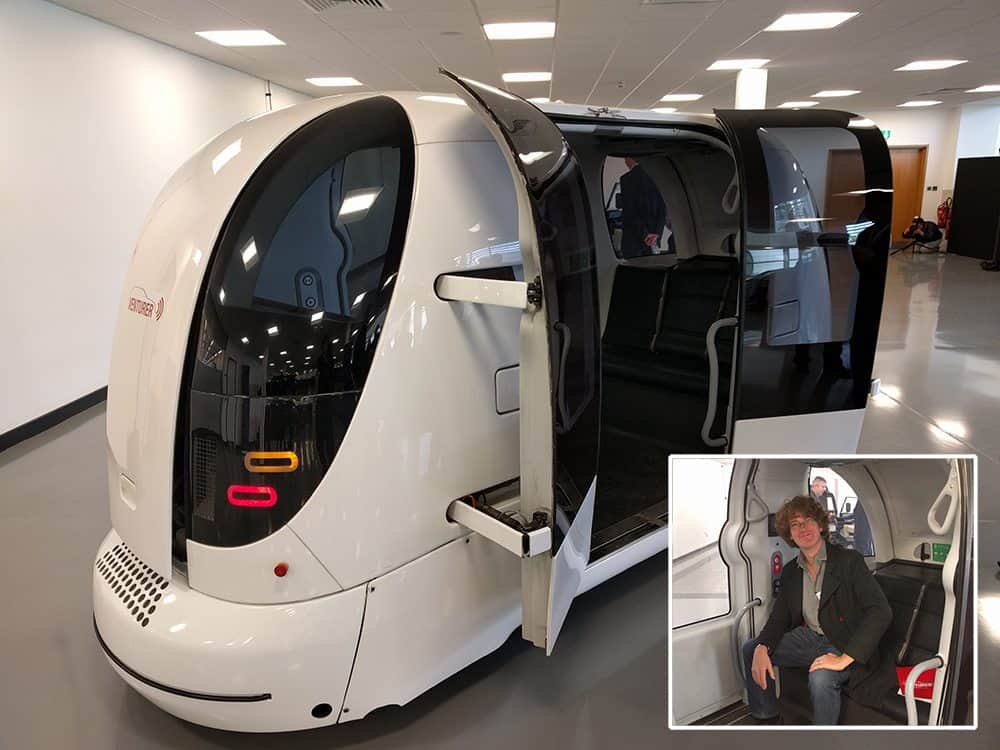 Electric autonomous pods: No petrol or diesel needed, and no driver either 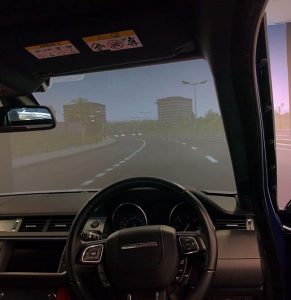 To aid with that testing, we also saw an immersive simulation (see right), allowing people (and machines) to test out various driving scenarios, such as switching between driver and computer control of the cars and seeing how the cars respond to various real-world scenarios, but without the possibility of harm coming to either people or vehicles.

It will be a great way to see just how safe driverless cars are and see if they can really can reduce the number of accidents, something which seems likely, as, as Lee Woodcock from Atkins points out, currently “90% of accidents are caused by human error”.

The ultimate plan is also to use Bristol’s 5G smart city network to connect the self-driving cars, allowing them to communicate wirelessly with each other, so the cars know the driving conditions around and in front of them to make the planning of journeys as safe and as efficient as possible.

Dr Andrea Tassi from the University of Bristol tells us one solution they are working on is to deploy wireless receivers on lampposts throughout towns which can communicate with units in cars. Not just driverless cars, but all cars, so a complete picture of road use in a city could be known. 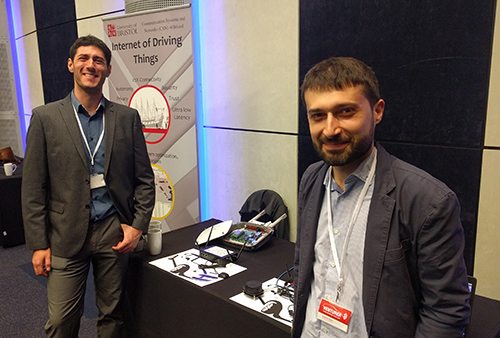 Communicating cars: Dr Andrea Tassi and team are
working on the tech to get cars talking to each other 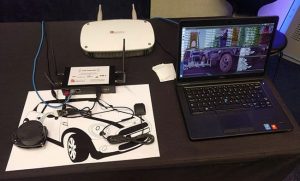 Andrea tells us “the communication between the cars and the lamppost-mounted units will be tactile”, as in it will work at speeds under 10ms. That’s faster than it takes your brain to see an image and is the equivalent of the response you get with a joystick when playing a computer game. This means the cars will be incredibly responsive to what is happening around them, making them very safe.

As Andrea explains: “Imagine if your car is approaching a broken down bus. Cars attached to the smart city network would be able to know if it was safe to go around the bus or not, pretty much instantly.”

The University of Bristol team is building these units out of existing components, similar to those found in a gaming laptop, and will be using open-source tech. This means the units will cost only hundreds of pounds as opposed to the £1,000s it would cost if they were custom made.

A big issue discussed on the day was whether self-driving cars would be accepted by the general public. Lee Woodcock acknowledged that “People like driving” so it was likely, at least at first, that there would be a combination of human and driverless cars on the road. However, as Chris Jackson from Burgess Salmon points out, “Driverless cars will open up driving to those who currently can’t do so by themselves.”

Insurance experts Axa’s Daniel O’Bryne was on hand to field questions about how self-driving cars would be insured when they hit the roads. He predicts that in the case of hybrid self-driving vehicles that allow humans to override them it would be clear from the data generated by the car whether a person or the car itself was in charge of the vehicle in the case of an accident. This would give a clear cut distinction that insurance companies could use when writing future policies.

How much will they cost? 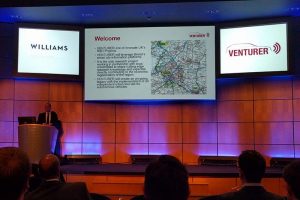 Lee Woodcock also told us that the cost to buy a driverless car would “be very high initially”, but that it was unlikely people would ever need to. He saw driverless cars operating “not as a physical asset, but more as a service – it will be access rather than ownership”.

There is no doubt that public acceptance is a key factor in the adoption of driverless cars, but with a bespoke test centre and trials for the South West planned very soon, it’s going to be a very exciting time for those looking forward to seeing autonomous vehicles ferrying us around on our roads.

You can see more at the Venturer Cars website and keep up with the latest news by following them on Twitter: @Venturer_cars