Ben Howes and Steven Herd, co-founders of Zoetrope, go back a long way. They’ve been working together since childhood, and stayed in touch while Steven built himself up as an eBay seller and Ben explored 3D scanning at the University of Bristol. Steven needed 3D photographs for his eBay store, Ben built a prototype robot […] 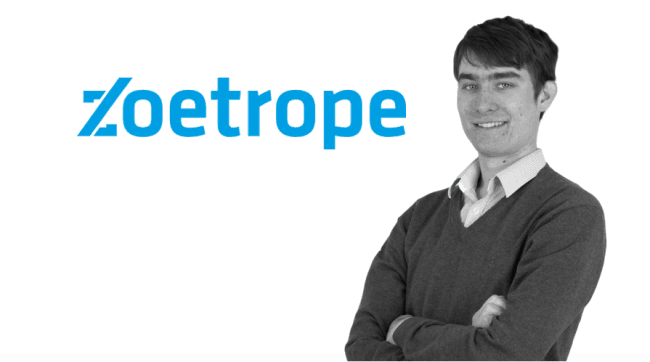 Ben Howes and Steven Herd, co-founders of Zoetrope, go back a long way. They’ve been working together since childhood, and stayed in touch while Steven built himself up as an eBay seller and Ben explored 3D scanning at the University of Bristol. Steven needed 3D photographs for his eBay store, Ben built a prototype robot to take them, and they decided there was an opportunity for something bigger…

In the beginning, Zoetrope was a 3D photography firm with a twist. The robot Ben designed is superficially simple, from the user’s point of view: you put the product on the turntable, press ‘go’ on the software interface, and photography happens.

Ben says: “The biggest difference between us and the competitors is the level of automation that we’re able to achieve. We approached it as a technology project, rather than a photography project.”

As a result, the emphasis is on what’s done with the images once they’ve been recorded.  Zoetrope’s software removes a couple of time-consuming steps from the typical process of capturing a 3D object: 1) images are automatically ‘stitched’ to a centred 3D image, whereas this is usually done manually; 2) their ‘one click’ feed allows customers to sync 3D images onto their own website, whereas this usually requires some clever coding.

The whole presentation process is significantly reduced, as colour balancing, cropping, centring, stitching, uploading and file naming is all taken care of.

With the technology now stable, Zoetrope is ‘spinning out’ the 3D photography side and moving on to bigger and better things: Steven is moving on, and Ben is transforming the business into an Internet of Things consultancy.

The number of connected devices in the world is growing exponentially – Gartner predicts 25 billion of them by 2020 – and Ben wants Zoetrope to ride that growth, providing practical advantages to everyday and enterprise users. In his ideal world, you’ll always know where there’s a parking space in town, always know what’s in stock at the shops, and – if you’re in manufacturing – always know what’s selling and what’s working on a minute-by-minute basis. “We’re really excited about it, because we’re all about making things more efficient,” he comments.

The first project is a partnership with Fidelis, a mobile device technology somewhere between the contactless payment card and the QR code reader. Fidelis offers a secure way to transfer data between devices through touch input emulation; Zoetrope’s role is connecting the Fidelis boxes to the web and opening up opportunities for development.

“This technology is worth nothing unless it’s integrated into apps” 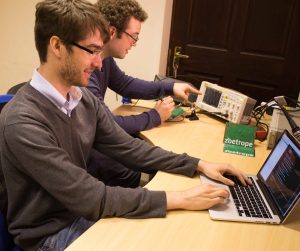 User take-up is integral to the Zoetrope model; Fidelis needs people to get involved, make apps and deploy the technology, and the advances in interactive imaging that Ben wants to make will need advertisers and retailers to engage with the possibilities the Internet of Things offers. As Ben puts it: “This technology is worth nothing unless it’s integrated into apps. It’s a building block.”

The idea of building blocks – modularity and solid foundations – is evident in Zoetrope’s business structure too. Early on, Ben felt that having a mentor – needing to ask for business advice – was a loss of face, and it wasn’t until eight months in that David Jessup, a retired partner from Price Waterhouse Cooper, came on board as a non-executive director and gave Zoetrope its direction.

“We’re almost from different planets, yet it kind of works”

“I attribute a lot of the thinking and the good ideas in the business to my mentor. We’re almost from different planets, yet it kind of works,” Ben confirms.

Zoetrope wouldn’t exist without the idea of networking – people from different backgrounds and different businesses collaborating and catalysing the community. It couldn’t happen anywhere else: the Universities of Bristol, Bath and the West of England produce a critical mass of innovators, and the presence of SETsquared encourages and nurtures them into local businesses. Alternatively, it may be something in the water.

Ben concludes: “I’m a University of Bristol graduate and I refused to leave. I don’t know if it’s entirely rational.” Perhaps not – but it seems to be working.

Zoetrope has two websites: zoetrope-imaging.co.uk for 3D photography, and zoetrope.io for the consultancy side. You can connect with them on LinkedIn and follow their every move on their blog.

Jon Garrad
Jon Garrad is a freelance writer for futurecontent.co. He writes, researches, teaches, campaigns for the Green Party, defends the fantasy genre with terminal intensity and takes up too much space on buses.